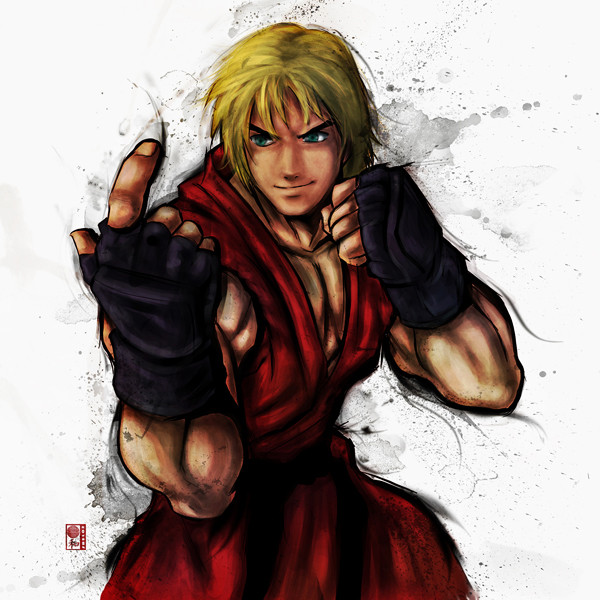 Despite coming from a rich American background, Ken Masters is known to be more than just a simple businessman. Ken's silver spoon upbringing proved to be little benefit when he was sent at a young age to train under Gouken's tutelage; it was there that he met Ryu, who would grow to be a lifetime friend. Unlike his quiet and soft-spoken training companion, he tends to favor bold, aggressive approaches; the yang to Ryu's yin. His spin on Ansatsuken techniques focuses on powerful melee strikes, earning particular acclaim as the undisputed master of the Shoryuken. Confident enough in his skills to rest comfortably on his laurels as champion of the US Martial Arts Tournament, he wanders the world as a jetsetter, occasionally testing his might in martial arts competitions -- but only to keep his skills honed for potential rematches against Ryu. Arrogant and brash, Ken nonetheless has a heart of gold, and fights with honor at all times.

Ken grew up the son of a well-off half-Japanese hotel entrepreneur and his Japanese wife. He began life as a child of the idle rich, and came very close to being spoiled. It was only after a school incident where he was caught cheating on a test that it became clear that this boy needed some training to rise above the idle nature of his upbringing and be instilled with a sense of ethics and morality. Ken's father decided to send the youth to Japan to train under his old comrade Gouken. It was there in Gouken's dojo that he had perhaps the best time in his life, though it was also the toughest time of his life. The training was hard and the other student there at the time, who was Gouken's adopted son Ryu, was a cold fish. But, at least, it was fun to tease him. Then, ultimately, to compete with him. Until finally the two grew very close. This was Ken's life until Ken reached the age of 23 and Gouken told his students they must go out into the world to further hone their craft. It was with a mixture of sadness and excitement that the youths departed. Ryu would go on his journey of introspection and training, while Ken... Ken went back to the states and promptly started winning tournaments.