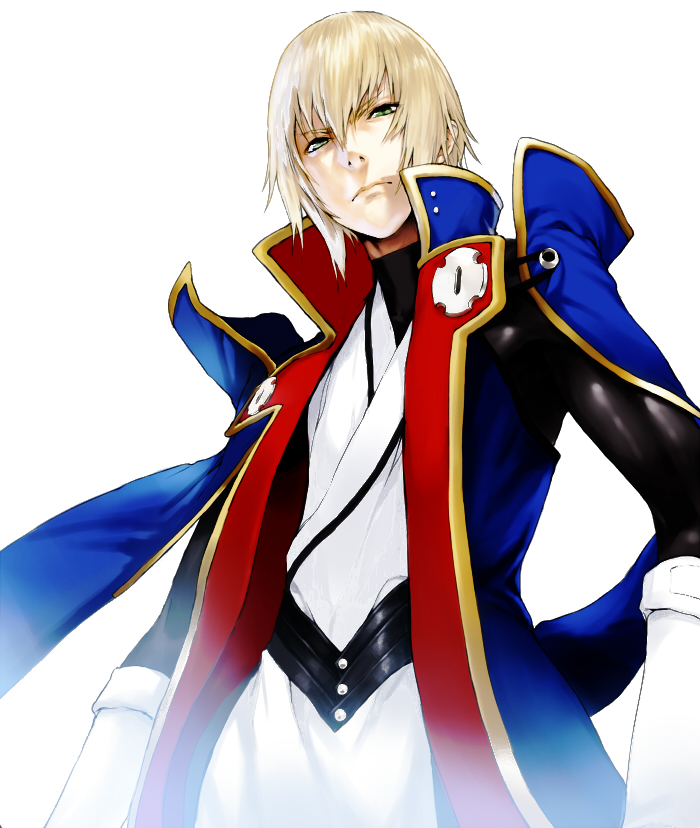 "Dispatched in mankind's darkest hour, we are knights of the blue flame!"

A dark-minded and unsettled man, Jin Kisaragi holds an auspiciously high rank in the Novus Orbis Librarium for the imbalances of his mind. Obsessed, in a word, with Ragna, his estranged brother from distant memory, everything Jin Kisaragi has become or ever will become is arguably influenced by him. However, his obsessions and compulsions are rarely intuited by others; he was not always this way, and though he swift grows cold, secretive, and aloof, he can still have a polite side, if he so prefers. While he has not been decorated as such, his moderately high station in the NOL as one of its strongest knights underlines his obvious skill and talent: He is capable of wielding and using the Nox Nyctores 'Mucro Algesco: Yukainesa.' This weapon takes on the shape of a long Japanese court sword, but is forged of pure cold. Using it, Jin can master the powers of winter, freezing his enemies in place. However, like many Nox Nyctores, Yukainesa has a deleterious effect on Jin's mind, and though he still stands strong against it, it may only be a matter of time before some triggering event shakes him to his core, setting his path in stone forever.

Illyria Act 1 - Establishing Footholds - Unparalleled in skill within the NOL, the cold Jin Kisaragi leads the NOL to the forefront of the battle against the occupiers of Illyria. As the expedition sets up, he holds the vanguard as the champion of the NOL. To answer him? An ogre-like creature, fortified with a horde of gnashing goblins and bogies. Armed with the Yukianesa, the unstable Jin Kisaragi faces the army alone, making a demonstration of force to run to the very heart of the strange occupiers of Illyria. - Log created on 18:34:00 03/16/2018 by Jin Kisaragi, and last modified on 12:14:25 03/19/2018. Cast: Munin and Jin Kisaragi.