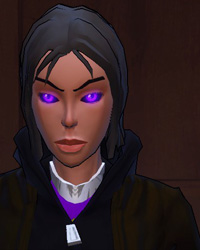 "Hide it in the plothole. No one ever checks those."

Munin is a bit of an odd one. The somewhat short woman usually can be found reading quietly, when she can be found at all. She rarely stays in one place too long, working odd jobs where she can until she has what she needs to move on. When engaged in conversation, she is open and friendly, but one can't help but get the feeling she's holding something back somehow. Her strange, violet-colored eyes never seem to stop moving, observing her environment, and sizing up people around her that come to her attention, even as her lips and mind address someone to whom she is speaking. Rumor in some circles is she's looking for someone or something, but none have managed to verify this information as of yet. Despite her lack of fighting record at the moment, what few rumors there are about her say the shadows about her strike when she cannot. Then again, who can honestly trust rumors?

Munin had a suprisingly normal upbringing. She is the daughter of a Norwegian scholar (her father, Ingolf Arshe) and a japanese soldier who was stationed at the Japanese embassy (Tanaka Kyoko). They met, fell in love, and when her military service was up, she moved to Norway to live with him and raise a family. A few years later, they had one set of near-identical twin girls, who they named Munin and Hugin, after the ravens of Norse myth.

As a child, and a young adult, Munin was the 'quiet and inquisitive' one of the children. While friendly, she usually kept to herself, silently observing the world around her and those within it. She usually noticed the details her more aggressive sister missed, saving her sibling a lot of trouble more than once. Around strangers she rarely would speak more than was needed, while all the time observing them and their habits. When she was a teenager this observative quality served her well when coupled with her well-read intellect, allowing her to tailor pranks, acts of anger, or other responses to the people they were delivered to. That is, when she wasn't nose-deep in a book somewhere off the beaten path.

Emotionally, she tended to be very reserved unless around people she knew and trusted. As she got older she learned to put up a front while in public, appearing more social or caring than was true. Very often she would feel it not her place to get involved with the affairs or actions of others without reason, even when it would get them hurt. The only exceptions to this were her family. Her temper, when it did surface, was the cold burning kind, subtle and intensly focused. Reprisals from her tended to be unexpected and well planned, but never seriously harmful.

As the years went by, the girls took after their mothers hobby of martial arts, although to different degrees. Hugin was the stronger fighter, with a much better handle of technique and poise, but was somewhat headstrong. Munin, on the other hand, while less capable in hand-to-hand, was always the craftier fighter, using her head to try to stay one step ahead of her sister in sparring matches. Hugin was trained in the naginata, while Munin preferred the smaller and lighter twin shortswords.

Munin, however, eventually lost interest in the martial arts, and began to persue more academic persuits, while her sister stayed the course and moved to Japan to advance her training. Moving to America, she began attending college classes at the University of Maryland, majoring in linguistics. Three years passed. While returning to the dorm after an evening class, she was jumped by a group of unknown men in masks and overwhelmed. This is the last complete memory she has before things become fuzzy.

She was unconscious most of her time as a captive. Three things stand out in her mind to this very day. The first is pain, and lots of it, as experiments unknown were carried out on her. The second was seeing the broken body of her sister, limp and lifeless, and gruff voices referencing her apparent demise. Hugin came looking for her after her disappearance, and apparently came close enough to need dealing with. The last was a single name: NESTS.

Eventually, she was deemed a failure and listed for termination. Two hired guns dragged her to an alley, with instructions to make it look like a robbery. The next day, however, one of them was found dead due to what appeared to be multiple stab wounds, while the other was babbling incoherently about shadows attacking them. Munin herself was nowhere to be found, and presumed dead.

The NESTS experiments had somehow caused her body to produce mass quantities of Chi, and her past martial training, desire to live, and rage at what had been done to her and her twin, gave her enough ability in the moment to control that chi to escape her assassins. She has been slowly recovering ever since, biding her time and training in what she remembers, as well as creating new techniques utilizing this newfound ability. Now healed as much as she is willing to wait for, she begins her search not only to become a better fighter, a tribute to her deceased sister, but to hunt down her murderers.

[SNF 2021.02] SNF: So Greased Lightning - In this heartbreaking vignette about the drama of teen angst, the pitfalls of tribalism and the coolness of leather jackets, Greaser Abigail and Biker Kyo face off in a death-defying race through the Lincoln Tunnel! They're not in the driver's seats, though - they're fighting atop the cars! Meanwhile, sweet and innocent Munin tries to put a stop to the battle before somebody gets hurt - even if that means hurting them in the process! - Log created on 16:22:15 02/26/2021 by Kyo, and last modified on 22:36:46 02/26/2021. Cast: Kyo, Munin, and Abigail.

[The Bell Tolls] TBT Act 2 - Double Blind - With the evacuation and rescue of the British diplomat's nephew, Max Evory is positioned to infiltrate Shadaloo operations within Southtown. Posing as a mercenary recruit, he finds himself sent to a brothel in Chinatown, with orders to dispatch Syndicate officers enjoying themselves. While executing criminals may sit within the scope of both the English and Shadaloo, the operation goes upside-down when the madame of the house reveals more monstrous seasoning amongst her women. Instead of fighting half-naked lieutenants, Max finds himself the lone survivor when the ladies of the night tear apart the Shadaloo agents... and he has to find his way to report to both his Shadaloo and British operatives, before the creatures of the night find him. - Log created on 19:33:42 08/01/2018 by Munin, and last modified on 20:49:49 08/03/2018. Cast: Munin and Max.

[Illyria] Illyria Finale - Final Boss Round 2 - With Kulshedra driven from Castle Illyria, the dragon has reached the Telluric Complex, where she and her minion, Saiyuki, feed upon the raw leyline energy. Before she can fully reform however, Ky Kiske and Munin manage to catch her, and force a battle. While fighting a dragon with so few numbers is challenging, especially alone, a wild card has arrived to assist the heroes: Oswald. - Log created on 23:02:56 05/26/2018 by Kulshedra, and last modified on 14:33:07 05/27/2018. Cast: Oswald, Ky Kiske, Munin, Saiyuki, and Kulshedra.

[Illyria] Illyria Finale - Ghost of a Chance Part 2 - A continuation of Illyria Finale - Ghost Of A Chance, where Sophia and Brandon seek to finish the job that he attempted not too long ago. However, fighting off the army of banshee took its toll on them. Will the lamia and the wizard have enough left in them to end the menace of Sylvanas, the Banshee Queen? - Log created on 19:39:16 05/13/2018 by Brandon, and last modified on 10:24:49 05/14/2018. Cast: Munin, Brandon, and Sophia.

[Illyria] Illyria Finale - Aspect Of Earth - Brought back to the deserted village where they had fought Franziska and her undead, Munin and Hugin wait for Sacred Order to pick up their prisoner. But Tremor at last reveals the depths of his trap! Channeling the spirit of the dragon within himself, he becomes suffused with Kulshedra's Earthen aspect. As Munin and Hugin encounter Tremor's stagnant, deathly aura, they realize that their previous fight was only the beginning... the true battle lies before them. - Log created on 14:26:23 05/12/2018 by Munin, and last modified on 00:10:08 05/14/2018. Cast: Munin, Tremor, and Hugin.