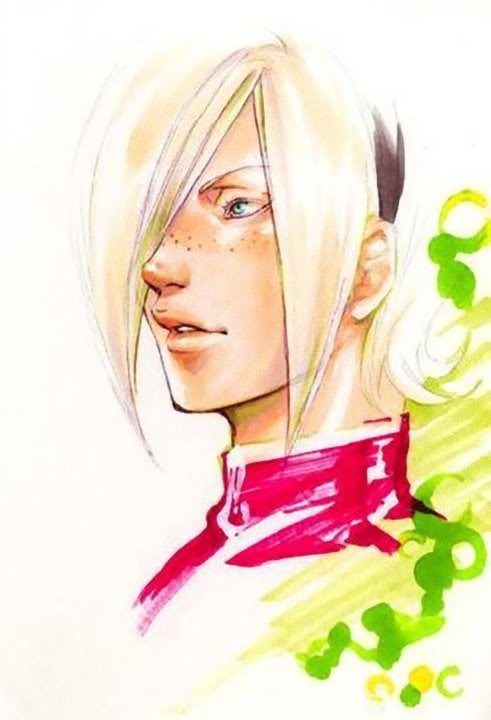 "Don't play your trump card till the end... the very end!"

A fresh face in the fighting world, even less is known about Ash Crimson than any up and coming fighter. Though it seems on the outside that he only joined the fighting world in search of something interesting to do, his real ambitions remain a mystery. Even his real nationality has yet to be known, though he was raised somewhere in France. What is known is that Ash is a surprisingly powerful individual despite his relative inexperience. He employs his own personal style of fighting, relying mostly on chi that manifests as green flames. He has a seemingly strong friendship with Shen Woo, though his antics and attitude sometimes anger the street fighter, as well as some ties with Duolon and Elisabeth, though the extent of these relationships remain undiscovered. Ash has a strange obsession with the powers granted to many of the world's top fighters as well, particularly those that are linked with Orochi. He will often observe dangerous spectacles just to see them. A lover of bizarre and unique things, Ash will take radical and unusual actions for what seems to be no reason other than that he finds what would be considered 'normal' as dull and uninteresting, as well as a bother. This is reflected in his odd fashion sense and hobbies, including painting his nails. Although Ash seems to be a simple person looking for an exciting time, there are hints that something more sinister lies beneath his cheery demeanor. Adding to this is the fact that Ash is far more powerful than someone who is simply out to have a good time.

[The Descent] Round 3 - The Danse Macabre - Voodoo Town in Haiti's been alive with the music of the spirits for weeks, ever since Athena Asamiya's visit. Joined and catalyzed by the debaucherous loa Baron Samedi, a neverending party of the living and dead grinds onwards as the Rebellious Flame Ash Crimson and the Serpent's Fang Ahmya Shiki fight for an opportunity to secure a place among the Descended. - Log created on 19:34:24 08/11/2022 by Ahmya, and last modified on 09:33:24 08/24/2022. Cast: Ash and Ahmya.

[The Descent] Round 2 - Terminal Line - Somewhere beneath Metro City lies a once-beautiful, buried subway station deemed best forgotten after a string of horrific tragedies... and yet, in the post-midnight hours when the "Rebellious Flame" Ash Crimson meets the "King-Killer" Craig Marduk, the station's alive with eerie, flickering lights and a phantom train-- but mostly the sounds of a bit of the old ultraviolence, and the endless rage of the inferno. - Log created on 07:02:39 07/19/2022 by Ash, and last modified on 08:44:18 08/09/2022. Cast: Ash and Marduk.

[KOF 2017] Act 2: Mission 18 - At the Edge of Time - Two individuals, bearing memories of the previous timeline. And one, with no memories of the last reality, still feeling inexplicably drawn to the smoking maw of the volcano. Zach, Ayame, and Ash all wander within, as the shadows pull and tug at them. The three see the heart of Mount Fuji's core: A single Time Sphere, sparking with energy. What was one before, has become now. But a single figure stands between them and the energy-engorged sphere. A figure of the past, a spectre... that would do anything to keep /him/ from remembering. - Log created on 14:06:31 10/21/2017 by Ash, and last modified on 15:18:05 01/11/2018. Cast: Ash, Zach Glenn, and Ayame.