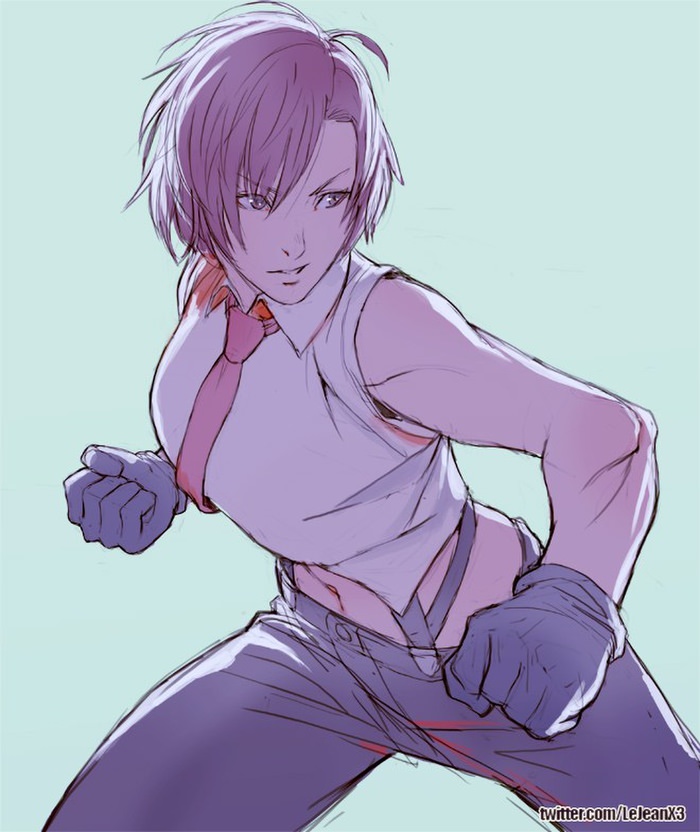 Once upon a time, Vanessa was a happy, lovely, young newlywed, ready to start a family with the man she loved. A kind, generous man, her husband's work was a mystery to her -- But, from what she gathered, he was a private investigator of some sort. However, one day, he went to work... And simply never came home, killed while doing whatever he did. Stricken with grief, Vanessa yearned to uncover the reason behind his death. Doing so has led her to join the same group he was a part of; An elite, freelance mercenary band linked loosely to the Ikari Warriors. Driven purely by rage, she became a highly talented boxer, building her body and her skills. Now in her early 30's, Vanessa is no longer a young woman, and the happy life she had believed she would spend with the man she loved has been stolen from her by unnamed forces. Able only to remember through her wedding ring, her most treasured possession, Vanessa is bitter with life on the outside. However, the warm-hearted, caring Vanessa never changed, even after her husband's death. But, will anything be able to crack her shell before it's too late?

Thanksgiving SNF - Thankful For: Mom! - With hundreds of martial arts across the world (and beyond), it's difficult for up and coming fighters to pick and choose their own style. For Honoka, her opportunity comes together in a special boxing ring set up at the Howard Arena. There, she will get the chance to be trained in the art of the boxing from professional pugilist Heavy D!. But there are some things that even a master boxer can miss. And those are the kind of things that demand a motherly touch from the crimson-haired brawler Vanessa, ready to give her own experienced input to both sides! But is she here to bring order... or a bit of CHAOS*? - Log created on 18:58:54 11/12/2020 by Honoka Inoue, and last modified on 10:26:38 11/15/2020. Cast: Heavy D!, Vanessa, and Honoka Inoue.

Of All the Ramen Shops in All the World - Blue Mary and Vanessa, both pursuing the same lead, run into each other at a run-down ramen shop in Chinatown. They come to a reasonable agreement to beat the hell out of each other until one of them gives up the job. As you do. FEATURING: absolutely no consumption of any ramen whatsoever. The horror! - Log created on 22:14:04 01/03/2019 by Vanessa, and last modified on 23:15:40 01/16/2019. Cast: Vanessa and Blue Mary.

SNF: Turkey in the Draw - Boxing isn't a traditional Thanksgiving pastime, and Thanksgiving isn't a traditional Spanish holiday. Neither of these facts will keep the classy boxing champion Dudley and the mercenary pugilist Vanessa from giving an arena full of blood-thirsty Spaniards a heaping helping of violence. But all throughout the fight, there is a mysterious, man-sized egg shuddering in the corner of the ring. What could be hatching from it, in time for Thanksgiving fun_? (Winner: Dudley) - Log created on 20:02:18 12/07/2018 by Vanessa, and last modified on 03:46:14 12/08/2018. Cast: Vanessa and Dudley.

Act 3: Mission 10) Summoning Sickness - Not all of Raiden's allies share his noble ambitions. Makai, a martyr chosen to battle youkai internally forevermore only to succumb to their power, wishes to see the world ravaged by the Thunder God's light. In the hopes that he will be spared the wrath of the divine being, the cursed exorcist assists Raiden with the very bound spirits that writhe within him, summoning the demons at his behest. There is but one way to stop these rites of damnation: Makai must be dispatched. Vanessa, the boxing detective, has been deployed by her employers to eliminate the mystic, and let nothing from hell stand in her way. - Log created on 22:31:45 11/27/2017 by Vanessa, and last modified on 06:55:30 12/03/2017. Cast: Vanessa and Makai.