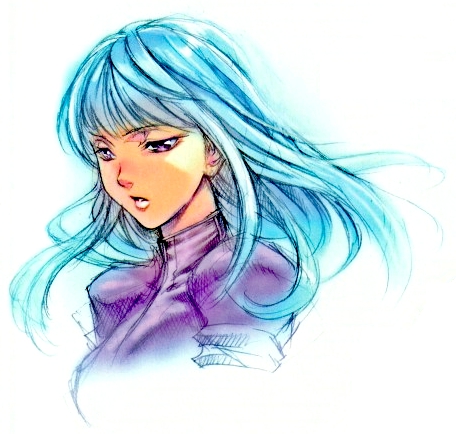 One of the more unusual works from NESTS' genetics experiments, this strange girl is probably one of their more impressive efforts. A cloned human whose design was primarily the work of Diana and Foxy, Kula's growth was accelerated once Diana and Foxy were transferred to another project. Now similar to a 15 or 16 year old girl, Kula wields an inherent power over ice when fighting. Quiet, but always interested in learning more, Kula initially seems shallow but she will likely improve with time. While emotionally underdeveloped, Kula nonetheless has excellent skill with fighting. She often comes up with other creative uses for her powers, hinting at an intelligence that is well ahead of the rest of her mental growth. She's grown to feel close to Diana, and especially Foxy, as these two have taken it upon themselves to try and help her along.

Before she was known as Kula Diamond, her original name was an embarrassingly long experiment designation. Life started as an artificial zygote suspended in suspicious incubation liquid. Accelerated through stages of infancy and childhood, by all appearances, now she looks sixteen years of age.

Kula is the perfect being, the culmination of years of study, scientific application, and manipulation over creation itself. The jewel of NESTS, they consider her a modified human and not a clone. With the Kusanagi flame subverted into ice, she is the only success to come from the project thus far.

Her purpose is to exterminate the renegade K', who had turned traitor during her first year of life.

To this end, Kula's loyalty needed to be assured. As her powers seemed limitless, unlike the flamewielders who couldn't contain the conflagration without help, the last thing NESTS could tolerate would be to lose another product of incredible value.

While some parts of her mind were developed, others languished in toddler stages. Efficient in a fight, able to make sense of strategy and mechanics, beyond that was a mindless puppet. A girl with no emotions, who could not make sense of complicated feelings.

NESTS deployed an android named Candy Diamond, who would monitor Kula and provide assistance in battle. This was the child's first friend in the world, Diana and Foxy not withstanding. The three have been far more affectionate than necessary, and it won't be long before the little princess begins to think for herself. Perhaps one day, she'll break free... lest she remain a living weapon forever.

[KOF 2017] Act 3: Mission 26 - A Song of Ice and Fire - Kula finds herself trapped in Southtown, with no way to escape. Calling for a temporary truce, she follows The Beast of Prey to a central underground train station. There, she discovers a brother: Nameless. Nameless has no interest in Kula leaving, instead wishing to enlist her in ensuring the people of the city remain trapped and sentenced to nuclear abolition. Tensions further escalate as while certainly Nameless and K' cannot agree, Kula must choose one or the other, or her own lonely path between them. - Log created on 14:41:34 11/22/2017 by Kula, and last modified on 05:57:35 05/29/2018. Cast: Kula, K', and Nameless.

[KOF 2017] Act 2: Mission 20 - Ice to Meet You - Meanwhile, a covert operations team of Spetsnaz infiltrate outside of Southtown, to stage their advance into the dark forest. Intercepting them are NESTS Special Forces, led by Kula on a scouting mission that quickly turns into something much more. As Sergei and NESTS duke it out in the woods, a cold heart battles against a fiercer chill. Who will triumph, to claim the prize that lies beyond the foliage? The Command Gear of Japan, sought by both the UN and NESTS, so close yet so far... - Log created on 16:49:42 10/21/2017 by Kula, and last modified on 01:37:58 12/05/2017. Cast: Kula and Sergei.

[KOF 2017] Act 2: Mission 2 - Seek And Destroy - With Yoshiaki captured by NESTS, it is time to make their move. Not directly, of course. They have people for that. Unknowingly pawns of NESTS, both Kula and Sylvie are lured to strike out at the Combot Research Facility. Their mission? Clear out the base, and expose the technology for NESTS to acquire. Unfortunately for them, they are quite expendable, and with Sylvie's previous actions, they have a guest waiting to greet them, fresh out of the depths of G-Corporation skunkworks. - Log created on 18:59:13 09/28/2017 by Sylvie, and last modified on 23:10:37 10/05/2017. Cast: Kula, Sylvie, and Gigas.