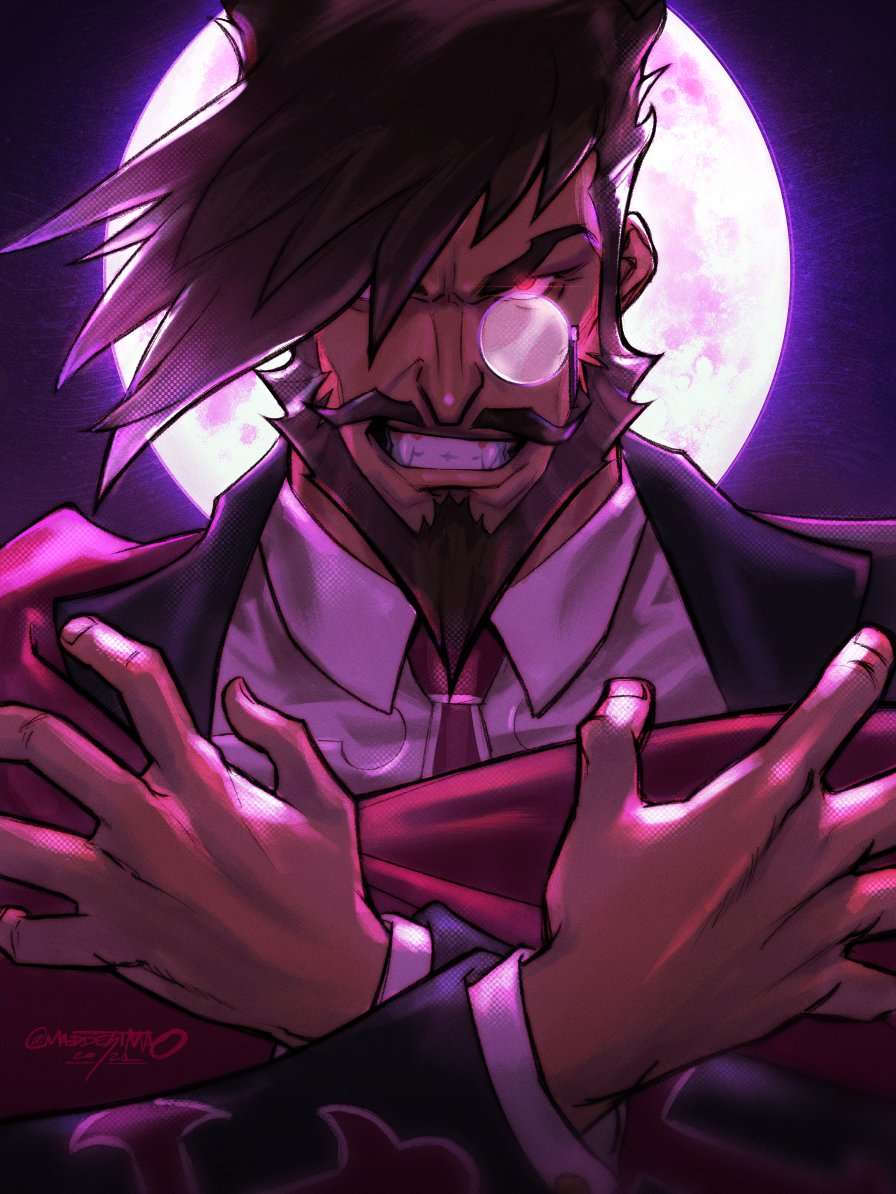 "Your desires must grow... A good life... A good death, they do not carry the same meaning. Seize it! Your future!"

Slayer is a vampire of extreme age who seems to enjoy dabbling in the human world out of a respect for their ingenuity and passion. Having lived much longer than humans, he possesses a strengthened sense of perspective, and as such, he generally remains calm and dignified regardless of the situation in which he finds himself. Despite this, he is not without passion. Slayer is a lover of refined things: Haiku, passion, romance, and competitive combat among others. He often stops to admire the beauty he sees in the world, and in those younger than himself. In combat, he fights with abilities and a technique that are downright otherworldly - he is occasionally frustrated by the lack of challenge others are capable of presenting him with, but is nevertheless graceful to his opponents and will often praise them for good performance. As a superior being, he tries his utmost to remain out of human affairs as it is not his place to tread, but in his 'old age', Slayer finds he has grown attached to humans and their world - to whatever extent he can, he works from the shadows to help guide mankind's heroes in their secret wars.

[The Descent] Round 4 - Only the Water Knows... - There is no flooded sub-basement in Calgary, Alberta's Saddledome arena. There is no deep, walled off floor which was all but annihilated in the flood which scourged the arena years ago. It has since become a seemingly endless underground sea as the world buckled beneath the strain of hosting clashes between powerful fighters. And so, in a place which doesn't exist, ravaged by a disaster which never escalated as far as it could have, drowned in stale waters which could never be, and populated by suffocated people who never were, a man who refuses to die and a woman who refuses to abide the sanctity of life will seek a chance to advance further into the Descent. - Log created on 18:25:04 09/05/2022 by Slayer, and last modified on 06:36:18 09/07/2022. Cast: Slayer and Lotus.

[The Descent] Round 3 - Eternal Envy - The air hangs heavy and thick, redolent with the anguish and envy of a Graveyard full of lost souls hungry for another taste of life-- and resentful of the Nightwalker who mocks them with his very existence, and the Fortuneteller who so adroitly sidesteps her own demise. - Log created on 07:35:36 08/12/2022 by Zafina, and last modified on 07:29:37 08/13/2022. Cast: Slayer and Zafina.

[The Descent] Round 2 - Midnight in the Garden - In a place of alien beauty and profound danger, Hades Izanami and Slayer - ancient entities of Death and Unlife - must take care not to trample the grass too harshly, lest it bite back at them with razor edges. The Garden of Shells in Chubu-Sangaku, Japan doesn't release visitors gladly-- but perhaps undying will can overcome its blossoming mysteries. - Log created on 21:29:59 07/22/2022 by Izanami, and last modified on 10:19:35 08/12/2022. Cast: Slayer and Izanami.

[The Descent] Round 1 - Samurai Vamploo - Hungary's Arena of Ravenous Delights is proud to host a meeting between the Darkstalker hunter Baiken and the enigmatic immortal known as Slayer. In turn, the House of Podiebrad trusts that Baiken and Slayer will be proud to serve as entertainment for a cadre of lordly monster hunters who will be dining just beyond the arena's boundaries. - Log created on 18:34:46 07/14/2022 by Slayer, and last modified on 19:15:20 07/18/2022. Cast: Slayer and Baiken.