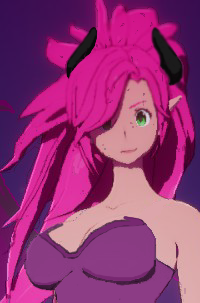 Until recently, fighting internet sensation 'Demon Queen' Lyraelle was thought by the public to be a darkstalker 'poseur' - mostly due to her own machinations and misleading FightTube documentaries. However, when Professional Fighting Worldwide declared a ban on darkstalkers on Saturday Night Fights following the invasion of Southtown and assassination of its mayor by darkstalkers, the Demon Queen 'came out' as a bona fide darkstalker - before announcing her rival 'Midnight Channel' brand catering primarily to creatures of the night and their fans. From that point forward, the Demon Queen has been an ambassador for darkstalker rights, using her entrepreneurial success to provide employment and security for a diverse legion of darkstalkers and darkstalker fanatics, even rehabilitating former violent darkstalkers in the public eye. After months of PR mismanagement of Saturday Night Fights by PFW coupled with rising popularity of the Midnight Channel for its diverse cast and more extreme matches (not to mention the host), the company cancelled its ban on the supernatural and, in a surprise turn, now employs Lyraelle as a presenter for its newly merged Midnight Channel content. Still, the true nature of the celebrity succubus remains mysterious, and many who have fought her hold a sense of distrust toward the demonette - and especially her spaded tail...

[Dead or Alive] Invidia - Emboldened by an encrypted file given to them in secret during the tumult of the Darkstalker riots, Gregory and Velvet Blue have discovered that Ultratech's JANUS Project is hiding a secret -- that the process to separate the humanity from a Darkstalker is not always as clinical as its made out to be. Some, it works on, and the process is a success. Some are imprisoned forever as hosts for the very machines the company is fielding to capture them. And yet still others are somewhere in-between. Deep in the holds beneath the JANUS facility, the team and their erstwhile backup will find themselves face-to-face with the most devastating secrets yet. - Log created on 19:33:53 07/22/2022 by Lyraelle, and last modified on 19:00:09 08/08/2022. Cast: Gregory, Velvet Blue, Lyraelle, and Aeria Corday.

[Dead or Alive] The Devil's Advocate - Having successfully infiltrated the FATAL CORE's labritory facilities, the Demon Queen finds her branded gambit still alive and angry. But every action has a cost, and the universe has a funny way of giving us exactly what we deserve. - Log created on 14:40:33 05/03/2022 by Rae, and last modified on 13:14:53 05/23/2022. Cast: Rae and Lyraelle.

[Dead or Alive] The Road Less Travelled - While other nations have taken a more clandestine approach to the political stability surrounding the tournament, Zepp's efforts have been considerably more forthright. After seizing abandoned DOATEC assets from rebel militants in India, Zepp has not responded kindly to the sudden appearance of a huge flying fortress over the ocean. The security sanctions it imposes make it very hard for unauthorized personnel to sneak in. Unauthorized people like Lyraelle. She's finally pinned the tracking mark to its final resting place: the ominous Fatal Core. Of course, she'll have to get through the flying security blockade first, composed mostly of a man the size of a wall. And the war the muscle wall is currently having with Ultratech's security detail, a man who is apparently made entirely of plasma and witty comebacks. And she has to do it at a screaming 193 km/h. On stolen Ultratech hypercycles. On a road made entirely of forcefields. No problem. - Log created on 20:51:33 03/30/2022 by Cinder, and last modified on 10:19:24 05/06/2022. Cast: Cinder, Potemkin, and Lyraelle.

[Dead Or Alive] DOA R2 - Lyraelle vs Whitney - The internet superstar Lyraelle's engagement ratings have been soaring since her highly publicized entry into the Dead or Alive WCC. But the cunning darkstalker is forced to balance a number of agendas behind the scenes, between trying to get on top of whatever it is DOATEC is doing vs. actually advancing in the tournament itself. However, the tournament is constructed strangely, unlike any other before it, and she finds herself backstage at the Ultratech Exhibition Arena building trailing a very specific supernatural mark. It's there she meets her next matchup, as if she were expected. There's a lot of money still up in the air for contractors, and the otherwise nondescript man on the other side has come to investigate the youth's activities. You see, the Mishima syndicate has heard that Ultratech is planning to make a very big move, very soon, and this JANUS Project and its relation to Darkstalkers is number one on the list. - Log created on 12:27:03 03/05/2022 by Whitney, and last modified on 23:24:11 03/09/2022. Cast: Whitney and Lyraelle. 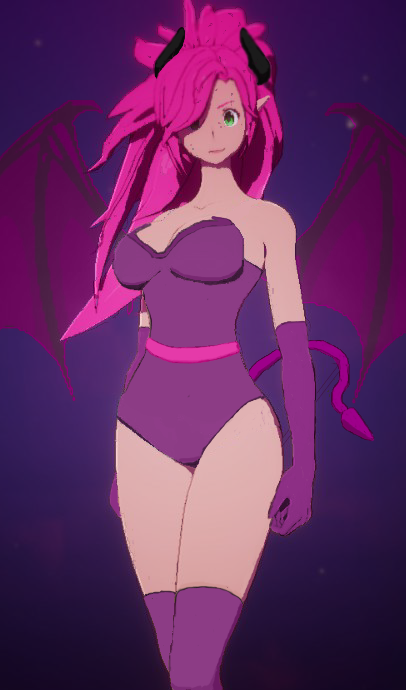