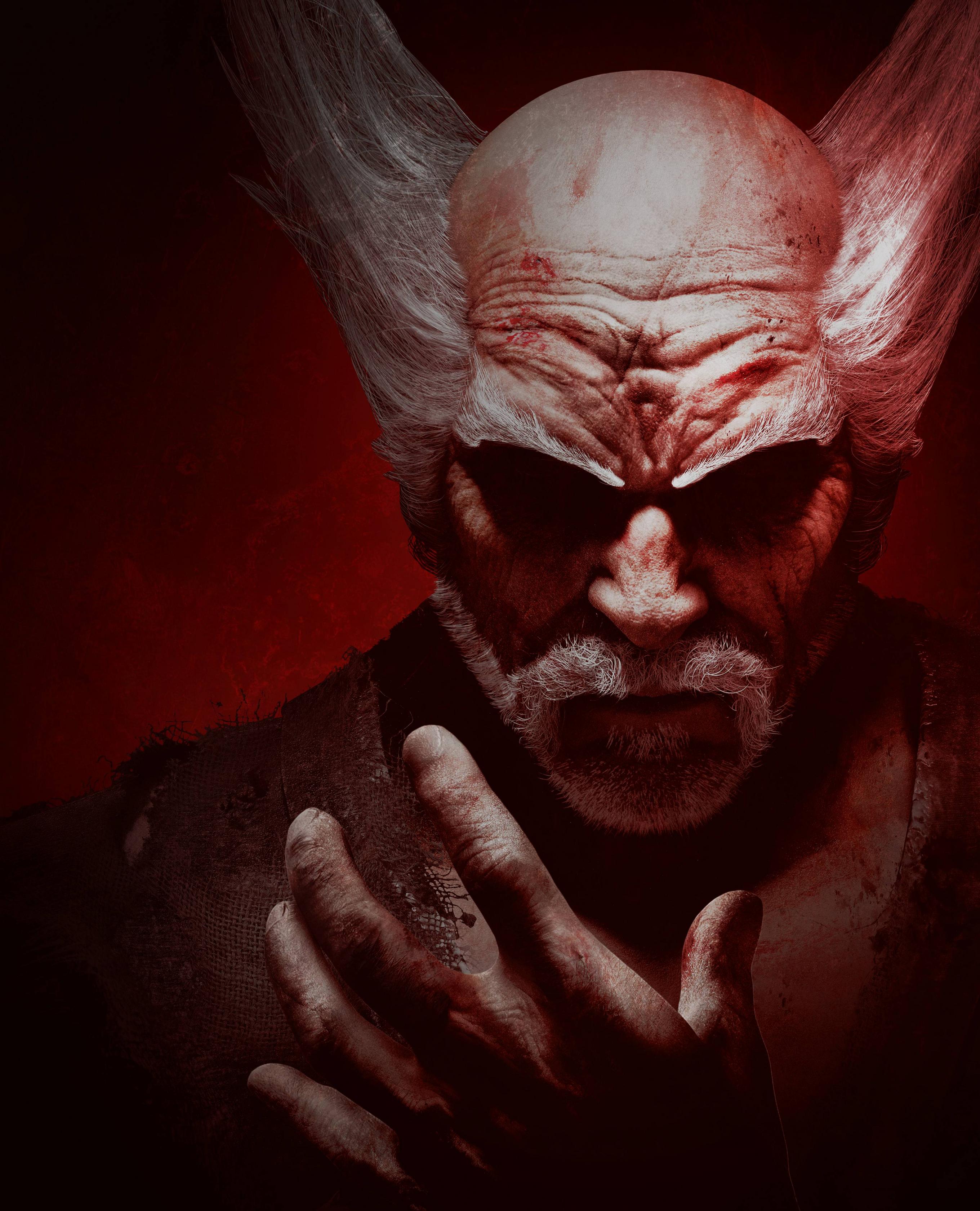 One of the most powerful men to ever walk to earth, Heihachi is the prodigy of the Mishima bloodline, son of the kind-hearted Jinpachi. A ruthless individual who values strength above all else, the impossibly high standards he holds has caused nothing but pain for Kazuya and his adopted son Lee Chaolan. Now in his twilight years, Heihachi has little slowed in personal strength, but has accomplished almost all of the goals he has set out for himself. Although not an antagonist to the world at large, his selfish tendencies serve only to advance himself and the Mishima Zaibatsu he personally built, and there is no obstacle he will not crush underfoot. More recently, Heihachi has taken an interest in the occult and research both, and has been patroning these fields in an effort to grow even more powerful. Heihachi may be old, but his ambition and fighting spirit hasn't at all diminished.

The Tekken Force was created by Heihachi Mishima after the events of The King of Iron Fist Tournament 2 when Kazuya Mishima was allegedly killed and thrown into a volcano. It acts as the private army and security force of the Mishima Zaibatsu, and its supreme commander is the concurrent CEO of the Zaibatsu. The ranks of the soldiers take after the names of raptors, from lowest to highest rank being Crow, Falcon, Hawk, and Owl, respectively. Heihachi's code name within the Tekken Force is Tiger.

The following are the five Owl-ranking leaders of the Tekken Force, collectively called the Parliament. Despite the Parliament's title, Heihachi has absolute control of them. Conventional wisdom states that each member of Parliament is either fanatically loyal to Heihachi or is a skilled victim of circumstance, unable to get out from under the Iron Fist.

Nakatomi (Ratio 1.3) - The weakest of the Parliament, Nakatomi is particularly skilled in marksmanship, as well as being a vicious knife-fighter. While he was a career criminal before his enrollment in the Tekken Force, Nakatomi seems to be constantly on the verge of a mental breakdown due to the brutality of his employer and the people he allies himself with.

Takenaka (Ratio 2) - Takenaka is an assassin, employed by Heihachi to eliminate any enemies he sees as an issue. A master of stealth and swordsmanship, Takenaka is a veritable modern day ninja, having hailed from one of the secret ninja clans that dot Japan. He doesn't care to say which. He will risk his life trying to see Heihachi's ambitions come to fruition, and is one of the few men Heihachi seems to trust.

Fujimura (Ratio 3) - Currently the only woman in the Tekken Force as of this moment, Fujimura has developed her own fighting style, which revolves around killing your enemies as efficiently as possible with whatever weapons might be on hand. She appears to lack all emotion, including a shock response, and doesn't respond at all to pain. Heihachi seems to trust her as well, and she appears willing to die for him.

Matsumoto (Ratio 4) - Matsumo was one of Tekken Force's Falcon-ranked officers before losing a fight to Darkstalker Velvet Blue. As punishment for his failure, Heihachi forced Matsumoto to be the first human experiment in the Zaibatsu's experiment to create Darkstalker and human hybrids. The monster that was the result of this is horribly strong, though Heihachi has since beat the poor beast into submission.

Kawabota (Ratio 5) - Kawabota has been with the Zaibatsu for a long time, first as its fixer, and now as one of the members of Parliament. Kawabota is a massive brute of a man, able to withstand serious amounts of damage. He utilizes a ka-bar combat knife and a high-powered handgun in battle, as well as explosives or whatever else he can get his hands on.

OUT OF CHARACTER INFORMATION

Heihachi's player will always try to be inclusive in all of his schemes on-grid, and for as long as he plays Heihachi, will almost always have some kind of plot in mind for players to thwart. I won't be using the Tiny Plot system for this, as I'd like to use that instead for King of the Iron Fist tournaments. The minions listed above are intended to be antagonists to lower ratio characters.

Tale of Two Kings: Soldiers Of Fortune - After securing Vinnie on behalf of Fujimura's orders, Takawashi retires to the old Mercenary bar 'Mukaezake' to blow off some steam. While fighting with his fellow Tekken Force soldiers, he meets with his old friend and current Parliament member Kawabota. There, he shares some of his thoughts with the direction of the Mishima Zaibatsu, as well as some possible opportunities he had heard of... - Log created on 09:55:19 10/04/2022 by Rugal, and last modified on 11:02:58 10/11/2022. Cast: Rugal and Heihachi.

[The Black Dragon] Black Dragon R4 - Teaching Strength - With Mitsuru in his clutches, Heihachi finally meets with the head of the Tokugawa family, to discuss her fate. But the Mishima finds his values challenged by Mitsuru's father, as they together decide Mitsuru's fate. - Log created on 11:14:12 06/26/2020 by Mitsuru, and last modified on 11:23:30 06/28/2020. Cast: Heihachi and Mitsuru.

Black Dragon R4 - Subject NT01 - When Steve awakens, not only does he find out he's been separated from Mitsuru, but that he's now the captive of Heihachi Mishima. And while the evil old man's plans for him are nothing short of nefarious, he's not the only prisoner of the Tekken Force, as Doctor Gepetto Boskonovictch once more finds himself a tool in the Mishima family's schemes. Will Steve be able to find Mitsuru again? Will he find out more about his mysterious past and what Heihachi wants from him? - Log created on 11:26:21 06/02/2020 by Heihachi, and last modified on 16:31:58 06/03/2020. Cast: Steve, Heihachi, and Mitsuru.

[The Black Dragon] Black Dragon R4 - Cut Off the Head - Having pledged the support of his forces to the assault, a squad of Heihachi's Tekken Force utilizes the chaos created by the NOL's frontal assault to slip into the facility. Eager to gain access to fresh subjects for their employer's experiments, the infiltrators discover that their incursion may yield an even greater prize: the Dragon herself! Caught alone in the depths of power plant, Kira must prove that her recent 'improvements' have made her far more dangerous than anyone realizes. - Log created on 09:58:44 05/28/2020 by Kira Volkov, and last modified on 17:15:29 05/28/2020. Cast: Heihachi and Kira Volkov.