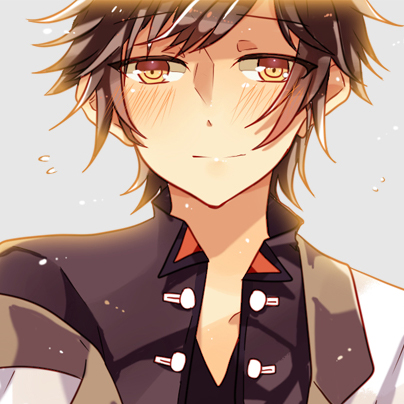 Even to his classmates, Haru Sakuraba is an enigma. Nobody really knows anything about his life before he transferred into Justice as a freshman one year ago, not even where he came from or even if "Haru Sakuraba" is his real name. Shy and studious, all most people know of him is that he's fond of yoyo tricks and cooking and consistently gets top scores on his exams. This might be why plenty of people are confused at the high school sophomore's rumored entry into the world of professional fighting. Those who've seen him fight report that the unassuming Haru uses a highly tactical style, adapting to his opponent's attacks. Of course, why would a shy nerd suddenly start street fighting...?

[ Relevant OOC Info ]
Haru's psychic powers come, like a handful of other psions, from his being host to the inherited soul of a divine being (in his case, the bodhisattva Guanyin). His particular ability is psychometry: the ability to read someone's thoughts or past history through physical contact. This is why he wears full-coverage clothes and gloves, and fights with a weapon rather than his raw fists.

[ IC Info ]
Haru Sakuraba is a second year at Justice High. He is from the Ryukyu Islands, where his family have run successful businesses for many years. However, shortly before beginning high school, he had a falling out with his family and now lives full time in Southtown, even when Justice High isn't in session. Through various adventures he fell in with the Psycho Soldiers and is now counted among their number, doing his best to learn how to control and understand his powers.

Shy, studious, and an absolute dork, Haru went completely unnoticed by his Justice peers for the first year and a half of his high school career. When he began professional fighting, however, he attracted surprising (to him anyway) positive attention and has begun to blossom a bit socially since then, making more friends. He greatly idolizes Athena and Kensou, his teammates.

SNF: ROOKIE RIOT WORLDWIDE BELT - Sven Maesters, the War wolf of Sweden, takes on Justice High's own Haru Sakuraba on the latter's home turf. The winner takes home the Worldwide Rookie Belt! Prepare for a saga of heels, faces, and the most Disney film-approved cursing ever to appear on international television. - Log created on 16:22:57 04/14/2018 by Haru, and last modified on 16:09:04 04/15/2018. Cast: Haru and Sven.

Golden Angel R2 - Haru vs Hotaru - Two up and coming hopefuls treat the Golden Angel audiences to a fight surprisingly shy on hijinks, but incredibly full of heart. Giving it their all, the two martial artists who shared their first public match together come together once more and, through a protracted battle, take the chance to reflect on just how far they've come. - Log created on 15:23:28 02/03/2018 by Hotaru, and last modified on 00:26:01 02/06/2018. Cast: Hotaru and Haru.

SNF: Tomb with a View - For this weekend's very special 'phobias' episode of Saturday Night Fights, crazed murderer Freeman and decidedly not crazed high school student Haru Sakuraba are locked in a Venetian crypt to duke it out. This already sounds like the setup to a horror film, BUT WAIT, THERE'S MORE: what was in that syringe? Who is Freeman, really? And just what is the nature of Haru's power? Find the answers to none of these questions, and more, inside! (Winner: Freeman) - Log created on 16:12:06 01/15/2017 by Haru, and last modified on 01:07:49 01/17/2017. Cast: Freeman and Haru.