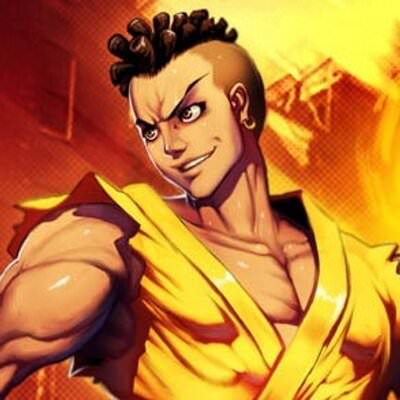 "Call the fire department because I'm on fire, baby!"

Sean Matsuda seems to be, at first glance, one of the many young men who aspire to become world-famous fighters. But there's a bit more to Sean than most hopefuls. Half-Japanese and Half-Brazilian, Sean has a great deal of natural talent, and models his fighting style off of the Ansatsuken of Ken Masters, one of his favorite fighters. Young and impetuous, Sean dreams of becoming truly skilled. To this end, he hunts Ken across the globe, desperate to convince the American to take him on as his student. Though talented, his abilities lack refinement of any sort and rely just as much on skills honed in basketball games as it is by training. Ironically, because of his behavior and appearance, many mistake him for Dan Hibiki... Which is the swiftest way to get a basketball in your face.

SNF: Oil's Well That Ends Well - For some reason the SNF producers seem to think that oil refineries have something to do with Easter. They also thought it was a good idea to let people brawl it out in a place designed to pump extremely flammable liquids. This is the story of that fight, and whether or not Sean can get a date. - Log created on 20:25:46 04/03/2018 by Rainbow Mika, and last modified on 00:59:19 04/04/2018. Cast: Rainbow Mika and Sean.

Act 2: Mission 12 - After School Special - With the protests worsening, Yuri has been labeled a pariah across the schools, held as a symbol of the corruption that runs deep within the institution. Her father, concerned for her safety, has demanded her daughter stay home at the Kyokugen Dojo, where he can keep a watchful eye on her. Naturally, while Yuri is mostly a good girl, so is Sean, who has returned from the King Of Fighters tournament to a school at war with itself. He has to reach Yuri to understand the chaos that is unfolding at his school. But will Yuri see a potential friend? Or will she see just another enraged student ready to attack her? - Log created on 16:01:20 09/27/2017 by Yuri, and last modified on 23:49:13 09/27/2017. Cast: Sean and Yuri.

NL#0096: Fei vs Sean - When Fei Rutherford is invited to take on a match in Brazil for the Neo League, he expected a fight in among a crowd of spectators in an arena! Not a fight on a dusty basketball court in a backwater town by an abandoned cathedral without a single person around to watch. To top it off, he has to fight Sean, who he has dubbed the flying monkey. Were the Neo League Officials even taking his matches seriously- In a match up of strict style versus creativity, who would win- (Winner: Fei) - Log created on 11:11:08 09/09/2017 by Fei, and last modified on 15:50:18 09/10/2017. Cast: Sean and Fei.