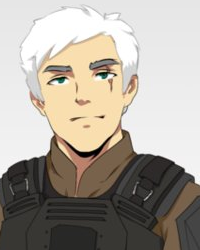 "Hard work will get you through just about anything."

A steady tempered and practical fighter, Zach Glenn was a staple of the professional fighting scene, charging up to the quarter-finals of the King of Fighters on at least one occasion. Besides fighting in front of the camera, the man has helped against numerous threats to humanity, both worldly and supernatural. His eclectic fighting style blends MCMAP fundamentals with a seemingly endless number of psychic blades, each wielded with brutal effectiveness. Now retired, Zach Glenn dedicates himself to working with his hands by tending to a small forge and occasionally venturing out to deal with patches of trouble. Stoic and focused, Zach seldom seems like the kind of man who would keep putting himself in harm's way for the sake of others, yet it happens again and again. Just what is he doing now, and where will he go from here?

[The Black Dragon] Black Dragon TDH - Hell To Pay - With the Casino being taken down, Duke gets his lead to his stolen artifact: acquired by the NOL during their raid, and placed in the Heritage Museum for safe keeping. Organizing the heist to procure it, he personally oversees the effort. The heist starts off without any hangups. But Duke quickly finds himself faced with what seems to be a direct assassination attempt by a posse wrangled by a man with a vendetta. Responding with brute force, the crime boss finds himself in a trap that only tightens the more he struggles. - Log created on 10:44:57 07/22/2020 by Duke, and last modified on 15:18:04 10/06/2020. Cast: Duke, Alba, Terry, Zach Glenn, and Abigail.

[The Black Dragon] Black Dragon R4 - Shadow Games - Informed by the NOL of the power plant and it's crucial energy flowing to the shield around the Dragon's Den, Zach assembles his small team and attempts to aid the assault on the facility. Sneaking past the front lines, they make for the control center of the plant to try and end things with one quick stroke. However, he quickly discovers that the mercenary queen has more than mindless monsters and run-of-the-mill henchmen waiting to deal with just such an infiltration attempt. - Log created on 13:33:48 05/25/2020 by Angel, and last modified on 17:39:37 05/25/2020. Cast: Zach Glenn and Kira Volkov.