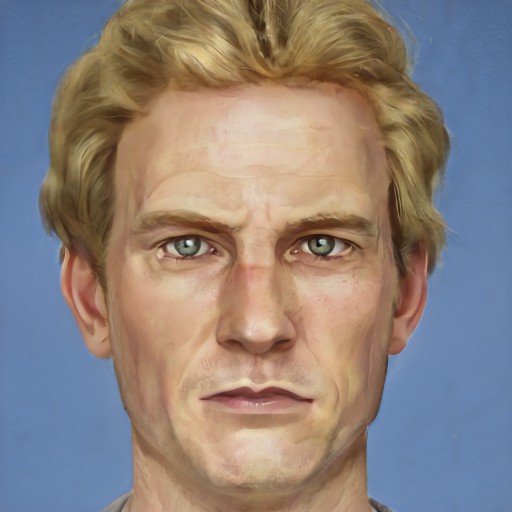 "I am simply a contractor. Nothing more and nothing less."

Whitney Saulder is a man from an unremarkable background. One who shows that even from nothing, terrible things may yet rise. Unfeeling, adrift and finding no potential purpose to derive enjoyment in his life, he moved from place to place looking for something to make of the world around him. Seeking out meaning, he passed along through religions, military service, communes and cults, business and pleasure. He had found nothing, but he did learn he could use his physical aptitude and emotional capacity for violence as a means to survive. He would eventually discover a place in a world. An ideal that burned so bright that even he could feel some of it's worth and warmth. The ideals of Gill and the reformation of the world. Perhaps once everything is razed, what comes from the ashes might, in some way, bring him to feel something for the world and life itself.

[Dead or Alive] New Blade Gospel, pt. 2 - Deep in the bowels of the DOATEC HK headquarters, blasts rip through the complex. Somewhere above, shinobi from all corners of the world war with corporate agents and nightmarish cybernetic assets. Even further above, the sky falls. However, Daisuke still has a mission to accomplish. Somewhere in this facility Raiza has found her way into the middle of a war, and Hideo Shimazu is still lost somewhere within. The entire situation is incomprehensibly dangerous, with evacuation alarms and imminent impact alerts blaring throughout the facility. Searching for Raiza or the missing teacher, Daisuke runs across a mysterious man in the bowels of the corporate labyrinth, clearly injured, but carrying files taken from the holding cell areas. The thing is, Daisuke even seeing him here is a loose end. And Daisuke needs to get past him. - Log created on 12:00:14 07/18/2022 by Whitney, and last modified on 11:36:17 10/16/2022. Cast: Whitney and Daisuke.

[Dead or Alive] DOA R3 - Kasumi vs Whitney: "Information Control" - While some other groups need to manually make their way out, in the tournament semifinals, competitors found themselves with much easier disposal. Airlifted onto a massive floating battlestation that is DOATEC's secret Fatal Core facility, Kasumi meets her challenger in a massive arena on the facility's broadcast floor. Here, al the threads about the dangerous Dead or Alive tournament meet, along with the trail of an old ghost of the Mugen Tenshin -- but the company is still pulling all the strings. Her opponent today knows a thing or two about pulling strings: Representing Heihachi's eye in the tournament, Whitney has developed interesting details that suggest the corporate upheaval is not just localized to DOATEC. Together, they could access Fatal Core's advanced communications arrays. But first -- they have a battle to settle. - Log created on 12:05:55 04/11/2022 by Whitney, and last modified on 18:09:05 05/23/2022. Cast: Kasumi and Whitney.

[Dead Or Alive] DOA R2 - Lyraelle vs Whitney - The internet superstar Lyraelle's engagement ratings have been soaring since her highly publicized entry into the Dead or Alive WCC. But the cunning darkstalker is forced to balance a number of agendas behind the scenes, between trying to get on top of whatever it is DOATEC is doing vs. actually advancing in the tournament itself. However, the tournament is constructed strangely, unlike any other before it, and she finds herself backstage at the Ultratech Exhibition Arena building trailing a very specific supernatural mark. It's there she meets her next matchup, as if she were expected. There's a lot of money still up in the air for contractors, and the otherwise nondescript man on the other side has come to investigate the youth's activities. You see, the Mishima syndicate has heard that Ultratech is planning to make a very big move, very soon, and this JANUS Project and its relation to Darkstalkers is number one on the list. - Log created on 12:27:03 03/05/2022 by Whitney, and last modified on 23:24:11 03/09/2022. Cast: Whitney and Lyraelle.

[Dead Or Alive] DOA R1 - Whitney vs Potemkin - The tournament listing is somewhat inocuous, the qualifier rounds being a matter of simple formality. However, the devil is in the details. A heartless man with many different shadow connections meets the massive Zepp soldier in South Asia, and neither are there for the reasons listed on the signup tally. There's a lot of backchannel interest in the region, due to most of the Dead or Alive qualifier events being held there, and more importantly, the huge amount of corporate and freelance contractors being called to the region. The Mishima Zaibatsu has heard word that G Corporation may be entertaining a US-based corporate buyout offer related to the tournament, and have sent representatives to DOA to find out. Interestingly, Whitney will find Potemkin at the US Embassy in New Delhi. What is the relationship between Zepp and the US right now to host a career Zepp soldier at the tournament? - Log created on 10:39:27 01/05/2022 by Whitney, and last modified on 21:57:17 03/09/2022. Cast: Potemkin and Whitney.

As the Story Goes - A meeting between minds on holy grounds in the American Southwest. Where the last known spot of Lightning Spangles sits beneath the desert night sky, two forces of darkness face off until the dawn. The dead are discussed, the lives they may yet lead are as well. And secret truths are exchanged. - Log created on 17:19:02 03/08/2021 by Whitney, and last modified on 21:53:23 03/16/2021. Cast: Honoka and Whitney.