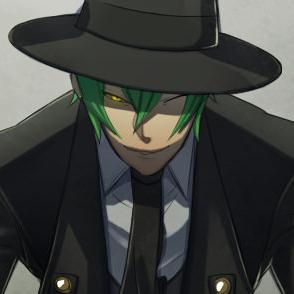 "Fighting is not my expertise..."

Unobtrusive and polite, Hazama competently operates Intelligence operations in the Asian region as a Captain, although none remember him rising through the ranks or attending academy. He has an unnerving presence to him, and claims that he's not best at fighting, with proper intelligence agents avoiding conflict. Surprisingly, after the Asian Colonel fell ill, the Imperator made him the Acting Colonel until a suitable replacement can be found. Unknown to all in the NOL, he is an artificial human created by Relius to bear host to Yuuki Terumi's soul and owns the former's old Ouroboros. However, the attempt to merge Hazama and Terumi failed, although Hazama's personality and soul were heavily influenced by the brief entwining. Hazama has no interest in permanently fusing with Terumi, wishing to remain his own person, but still serves as his physical link to the world for the time being. He almost never shows Ouroboros to people unless he intends them to die, as he tries to maintain a low profile within Novus Orbis Librarium to better serve his and Izanami's interests. As a being with no soul, he is almost impossible to read and tends towards playful slacking, something that especially frustrates those who order him around. Most people closest to him can detect the facade of his pacifistic politeness, and almost see the restrained fangs eager to bite...

[KOF 2019] Quarterfinal 4 - Team Aesop vs Team Kaka - The fourth quarterfinal match for KOF 2019 sets the stage for an awkward set of reunions in Southtown's Heritage Museum. Clio's Kaka Clan disguise has held up until now, but will it pass the scrutiny of Hazama, a former superior officer of hers? And whatever will Corporal Kaneko do when one of the Librarium's most wanted criminals is right there within reach? - Log created on 10:47:37 08/01/2019 by Clio, and last modified on 09:23:18 09/15/2019. Cast: Susano'o, Clio, Jubei, and Renka.

[KOF 2019] KOF - A Very Important Mission! - Acting Colonel Hazama enlists promising up and comer Corporal Kaneko on a very grave mission -- participating in the King of Fighters to investigate what is obviously going to be a complete and utter mess. This will surely go well for promising up and comer Corporal Kaneko. - Log created on 10:47:46 05/30/2019 by Susano'o, and last modified on 11:26:42 06/01/2019. Cast: Susano'o and Renka.