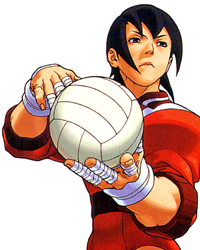 "Come when you're ready!"

The rising star of Gorin High's Volleyball Team, Natsu Ayuhara scores top marks in both athletics and academics. Amongst the incoming class of first-year students, she's already earning a reputation as a "Big Sister", respected for her smart, outspoken nature. Her classmates might be tempted to crack jokes about the unusually tall, unusually powerful volleyball star, but knowing her quick temper, they would likely make that mistake only once. Natsu's bickering matches with her classmate Shoma are legendary -- well, as legendary as a daily occurrence can be -- but her childhood friends Sakura and Hinata would agree that it's just how she shows her affection for the homerun hitter.

P-BBB 2018) Roy G Biv - Natsu vs May Lee - With the recent release of Cross Tag, RWBY has been identified as a potential fighting game to integrate. While we sort out whether or not we will allow certain Astral Finishes on certain characters, it's important to see if it is reasonable to include the theme. Taking place at just your regular high school, Natsu and May Lee must adopt their favorite RWBY persona, and carry out their wildest dreams of RWBY! Don't forget to check your Kawaii stat! - Log created on 17:51:32 11/14/2018 by May Lee, and last modified on 21:45:42 11/30/2018. Cast: May Lee and Natsu.

SNF: Sleepaway Camp - To help build interschool compet--cooperation, representatives from Taiyo, Seijyun, and Gorin High have been invited to weekend stay a summer camp, mostly vacated for the season. But when their chaperone disappears on them, who will stop a brawl from breaking out? And worse, what's this of rumors of a stranger on the property?! - Log created on 18:00:39 10/28/2018 by Mitsuru, and last modified on 23:56:20 10/28/2018. Cast: Hinata, Natsu, and Mitsuru.

SNF -- SYFI Event: Mimi vs. Natsu - As part of the GRAND OPENING BATTLE FEST to kick off the Southtown Youth Fighters' Initiative, Gorin High's star volleyball player, Natsu Ayuhara, has been matched up against a relative newcomer, the Seijyun student practicing her family's ancient kenjutsu style, Sumire Wakatsuki. It may end up being a learning experience for both! - Log created on 21:29:40 05/06/2017 by Mimi, and last modified on 14:19:37 05/08/2017. Cast: Natsu and Mimi.

Natsu Is A Big Dumb Cow - Because she won't let me hang out with her, she always picks on me, and she's always stuffing her face with cakes and it goes right to her big fat thunder thighs. And Karin is there, and Karin won't even help me get back at Natsu, even though she has lots of money. At least Brett was there, I can blackmail him into helping me ruin stupid Natsu's life later. Also I think this was a mall where Bryan killed a bunch of a people? I don't know I was just there for bakery goods and innocence there are a lot of malls in Southtown. - Log created on 13:52:34 07/27/2016 by Momo, and last modified on 11:49:08 07/28/2016. Cast: Natsu, Momo, Karin, and Brett.