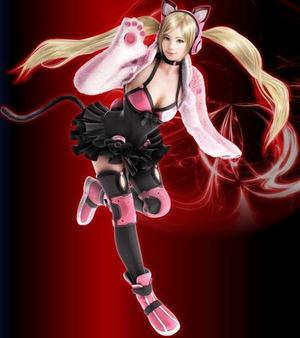 Even since her parents took her to an anime convention, Chloe wanted to be a pop idol. Specifically, a japanese pop idol. Copying the various pop idols of the world, she became a hit internet sensation when she donned her cute costume and performed on camera. Almost overnight, G-Corporation picked her up for an advertising contract, and now Lucky Chloe lives her dream as the face of G-Corporation. Uninvolved in most of the seedier and darker side of the business, Lucky Chloe mixes her choreography with combat finesse, dancing her way both into the hearts of her fans, to the chests of her enemies. While more of a performer than a fighter, she will do whatever she can to defend the honor of her company, for good or for evil.

[Dead Or Alive] Call Me Raiza! DOA OVA: Raiden's Angels - With a new mission from a mysterious benefactor, Raiza reaches out to her classmate for recruitment to the party. She and Daisuke soon find themselves joined by a third wheel... but maybe a tricycle is just what the doctor ordered? - Log created on 14:35:28 03/06/2022 by Raiza, and last modified on 23:56:41 03/11/2022. Cast: Lucky Chloe, Daisuke, and Raiza.

[SNF 2021.12] SNF: NEVERMIND THE BAUBLES - Lucky Chloe, the Christmas Kitty, has been chosen to perform for the lighting of the Christmas lights at Southtown Village Mall! Cold-hearted Canadian Alexis Lovell, crusader for the Communist cause, has come to cancel the commercialized capitalist Christmas carol caper! Can Chloe save Christmas, or will anarchy reign this holiday season? - Log created on 12:18:17 12/06/2021 by Alexis, and last modified on 19:20:05 12/18/2021. Cast: Alexis and Lucky Chloe.