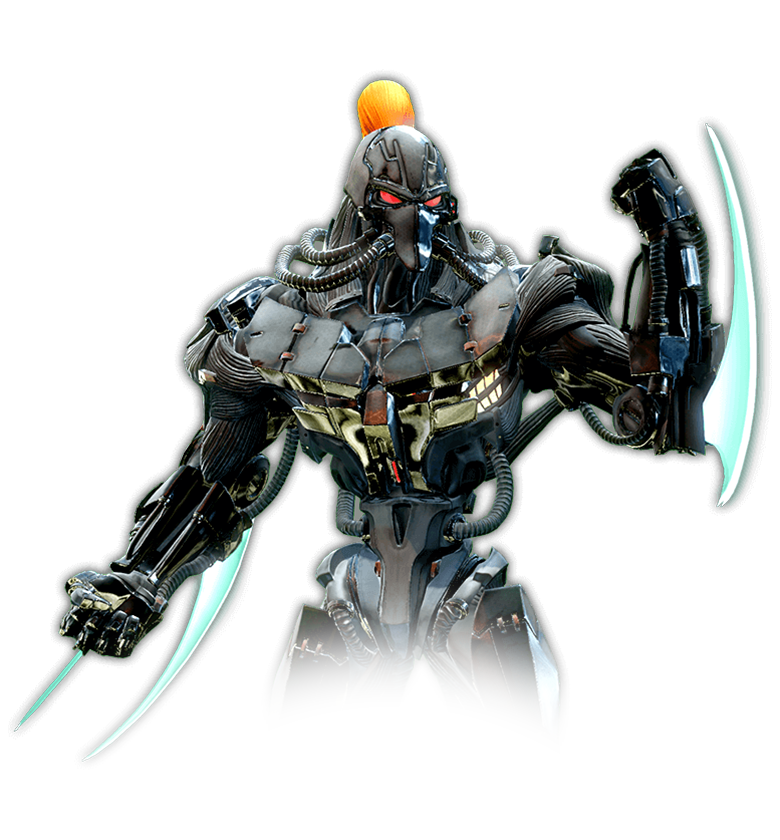 After the prototype for cybernetic fighter Fulgore MkI was defeated by first Killer Instinct tournament champion; Black Eagle, the project was deemed a financial failure by Ultratech executives and was scheduled to be terminated. That was until an innovative Ultratech scientist diagnosed the problem with the prototype. The cybersoldier's protocols were simply too advanced for a machine to handle, it lacked the coordination, ability to adapt, and skill needed to overcome challenges. While the machine could fight in theory it did not have the tenacity of a warrior to push when presented with a hard fight; it lacked a fighter's spirit. The solution was obvious, give it a fighter's brain, and who better for a candidate than the previous winner of Killer Instinct himself? Ultratech successfully abducted Black Eagle and placed his mind and parts of his body in the newly upgraded model Fulgore MkII. With the latest technological advancements at his disposal, state of the art weaponry and armor and given a true champion's spirit, Fulgore MkII is ready to devastate Ultratech's enemies and bring about a new era for fighting and the world. All while Black Eagle's soul struggles within the machine's body.

[Killer Instinct] [KI:Round 3] ANNIHILATE. - With Hayabusa creating a series of distractions externally, Baiken's previous matchup has been modified. She is still under watch by Ultratech's standing guard, but they seem mostly convinced that she is just there to fight strong monsters, as she had at the Red Expo. If Baiken pays close attention and finds her way into just the right places, she'll overhear certain things about her battle, and why it was altered. Something about Cinder being dispatched to the field to address several problems. That there is a saboteur in the rebel warzone, and that the sorcerer has gone rogue. Even as she is given relative leave to ponder over these issues, Ultratech has spun up one of its strongest achievements in the field of cybernetics to face her: the robotic Fulgore. Looks like she's found a monster. Baiken can sense the soul struggling inside the soulless, but this isn't the Red Expo anymore. This close to Ultratech's heart, the battles will get progressively harder from here on out. - Log created on 18:06:40 09/11/2015 by Baiken, and last modified on 11:15:19 09/21/2015. Cast: Baiken and Fulgore.

Hunter Killer - When Kiyomi's pack of Darkstalkers start running rampant across Eastern Europe, slaughtering humans and burning villages. They are reminded that humanity is just as capable of dealing out vengeance in the most painful of ways. - Log created on 18:48:03 02/17/2015 by Fulgore, and last modified on 20:48:49 02/19/2015. Cast: Kiyomi and Fulgore.