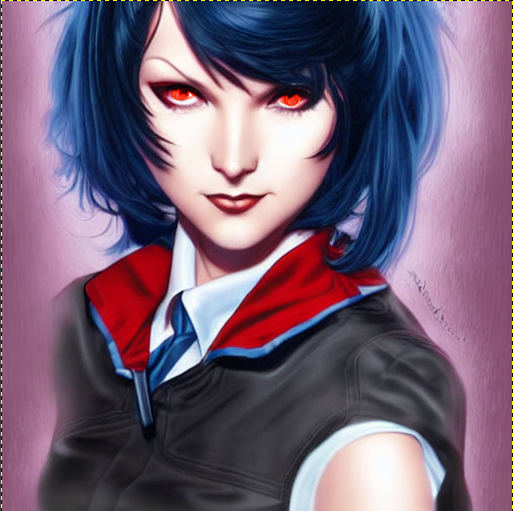 Edenlith was a normal girl, until she was at the wrong place at the right time. An incident, a talking cat (?!) and there we are, the path to a martial artist. She's crazy or acting like she's crazy, no one seems to really know. One may even wonder if she knows herself. She never speaks, but at times, she can still be heard in another way. Rumor has it she can heal herself to a point during fights. Her style is suppose to be weird, maybe because another rumor is the cat has been training her. As for her ambition, one would think she wants to be the best, but they would be wrong. She's looking for something, she looking for sensations. She's so bored most of the time. At least fighting makes her feel alive. Those red eyes, those blue veins showing in her face, whatever happens, things will never be the same.

[Dead or Alive] Dominus - The roar is louder than anything has a right to be. The plan was to escape, to pull back, to finally enjoy some peace and quiet. Then apparently a tyrannosaur broke confinement. During a relatively uneventual checkout at one of the Dead or Alive Visitor's Centers watching the final matches and accompanying news from what one would imagine to be a safe distance, an entire wall caves in. Apparently, Darkstalker attacks have destabilized nearby JANUS facilities, and well, apparently there's some confusion about where the sophisticated ICE system is supposed to be. As well as where Rafferty is supposed to be. Oh dear. - Log created on 18:18:10 12/23/2022 by Edenlith, and last modified on 11:34:15 01/08/2023. Cast: Edenlith, Nena, and Rafferty.

[The Descent] Round 4 - Vanishing Point - Lately, the lost and forgotten tunnels of a Buried Subway Station in Metro City have seen more life than they have in decades. Maybe that's why there's a faint blue pinprick shining at the other end of the tunnel, growing gradually larger, closer when observed-- and farther when approached. Maybe that's why soft murmurs susurrate through stale air, creeping ever farther into the barely lit darkness. Maybe that's why Athena Asamiya and Edenlith, the Hollow Girl feel judgmental eyes studying their every move. - Log created on 14:15:23 09/04/2022 by Athena, and last modified on 22:26:27 09/10/2022. Cast: Athena and Edenlith.

[The Descent] Round 3 - Midnight Audience - From the moment King Leo of Illyria sets foot in the throne room of a Gothic Castle in Transylvania, he and his next opponent in the Descent are met with dozens of expectant, spectral faces hungry for a little time with a noble personage. After waiting for so long, will they have the patience to simply watch as Leo and the hollow girl Edenlith clash, or might the risk of waiting another century to be heard drive them to interject themselves? - Log created on 16:47:22 08/12/2022 by Leo Whitefang, and last modified on 07:31:07 08/13/2022. Cast: Edenlith and Leo Whitefang.

[The Descent] Round 2 - Under His Eye - In a place of lingering strife and vengeful grief, pyromancer faces mentalist for the stakes of the continuing tournament path. They find within one another reserves even beyond what was anticipated-- and respected-- up front, finding as much challenge as either kombatant can krave. - Log created on 12:20:55 07/17/2022 by Kain, and last modified on 20:34:41 07/17/2022. Cast: Kain and Edenlith.

[The Descent] Round 1 - The Trampled Earth - In a Remote Village occupied by little more than burned, crumbling homes and ashes, the titan Kongou and the lethal husk Edenlith visit thundering fury upon a remote patch of jungle long since gutted by the engines of war. - Log created on 21:00:36 07/07/2022 by Edenlith, and last modified on 08:59:38 07/16/2022. Cast: Edenlith and Kongou.