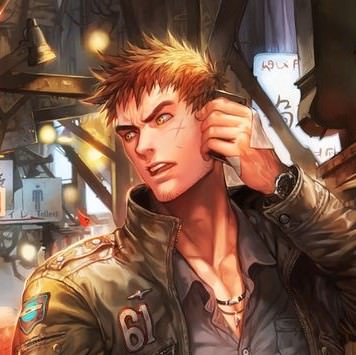 "That all depends on how much you're gonna pay me, mate."

The mercenary from Down Under, Jack Cooper comes from a long line of soldiers for hire. Father to son, some say back to the days their ancestor wound up exiled to Australia for breaking a contract with the English crown. No matter what happened back then, Cooper has a reputation for being loyal, sticking to contracts, and displaying a rigid sense of honor. Even if he doesn't always come off as the brightest bulb in the box, and insists on using boomerangs rather than more conventional weaponry. However, some say the meathead act is just that, an act, and conceals a shrewd mind and keen tactical sense. Between jobs, he often makes an appearance on the world fighting circuits, both to keep his skills sharp and show off for potential employers.

Act 2: Mission 4 - Follow The Trail - As the Hungry Wolves move into the next phase of the tournament, Brandon Malone finds himself a wanted man. Not wanted by the law, but by the mysterious forces seeking to assassinate him. His contacts quickly draw together a lead, however. A mercenary by the name of Cooper, whose background ties him to the very people who ordered his assassination. Brandon has to corner him at the Pao Pao Cafe in Southtown, and find out the truth of who is out to kill him. - Log created on 19:34:27 09/21/2017 by Brandon, and last modified on 09:22:37 09/22/2017. Cast: Brandon and Cooper.

Mission 7) Snips And Snares - Throughout history, it has been proven that all it takes to form an alliance is two great minds that think alike, for better or for worse. While Nagase and Noboru find themselves on opposing sides during the tournament, their goals align. In order to obtain that which they seek, they must work together... Because their enemies certainly are. Paid a hefty sum, two mercenaries for hire stand in the way of the HitBit facility's destruction. Oswald and Cooper have a welcoming gift for the intruders that is simply to DIE for. - Log created on 19:52:35 08/28/2017 by Oswald, and last modified on 21:10:38 08/30/2017. Cast: Oswald, Nagase, Noboru, and Cooper.

A Taste of Things to Come - On the island of the damned in the midst of the Lost Sea a gathering takes place. It is the commencement of the final Mortal Kombat tournament that will decide Earth's fate. Champions from Earth are summoned but their Divine Arbiter seems missing... - Log created on 20:49:49 09/01/2016 by Shang Tsung, and last modified on 02:22:39 09/29/2016. Cast: Honoka, Iori, Aranha, Charlie, Zach Glenn, Daniel, Zabel, Scorpion, Reptile, Nakoruru, Ryu Hayabusa, Cyrax, Alexis, Eadni, Shang Tsung, Cassie, Lotus, and Cooper.